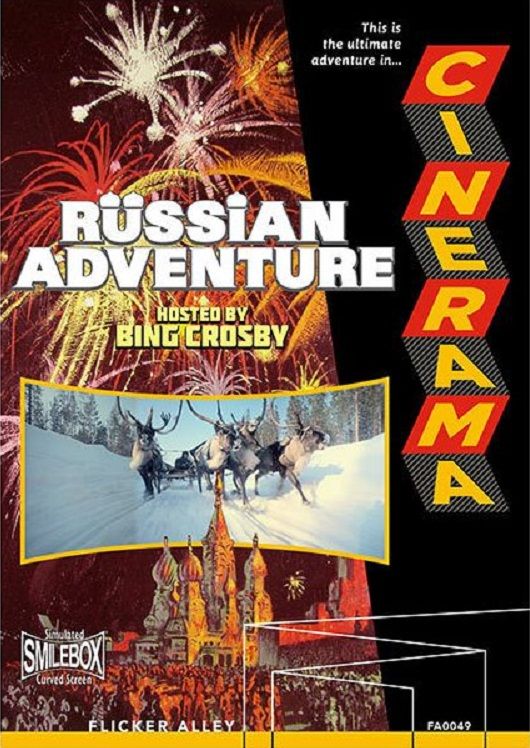 Narrated by Bing Crosby, this Cinerama project screens scenes of landscapes, cities, peoples, and entertainments of the Soviet Union. Highlights include the historic buildings and churches of Moscow, as the Kremlin; its subway and streets, a spring carnival, the seaside resorts and many more!

Photographed over an eight-year period by Russia’s top filmmakers, Cinerama’s Russian Adventure brings together some of the most exquisite, jaw-dropping, and beautiful sequences from over six Soviet Kinopanorama productions (the Russian equivalent of three-panel Cinerama). The film’s locations stretch from one end of Russia to the other, from the snow-covered countryside to the majestic subways of Moscow, from the deck of a whaling ship to the front seats of the Bolshoi Theater. Bing Crosby narrates the journey, offering both a grand and intimate view of a country and culture so often cited and yet so seldom seen.

In classic Cinerama style, your first glimpse of Russia is from behind the reigns of a troika, a traditional three-horse sled, speeding through the snow. Next, you’ll land in Moscow for spectacular shots of the Kremlin, the Volga River, the bustling street life, and a spring carnival complete with singing, dancing, and clowns on stilts. From there, you’ll marvel at the dazzling Moscow Circus, take a raft ride down the Tisza River, join in a wild antelope roundup on the Barsa-Kelmes, and witness a show-stopping performance of the famous Moiseyev Dancers. The most visceral sequences, though, take place not on land, but on water: the spare-no-details whale hunt aboard a factory ship in the Antarctic and the alien voyage of an octopus as it glides beneath the sea.